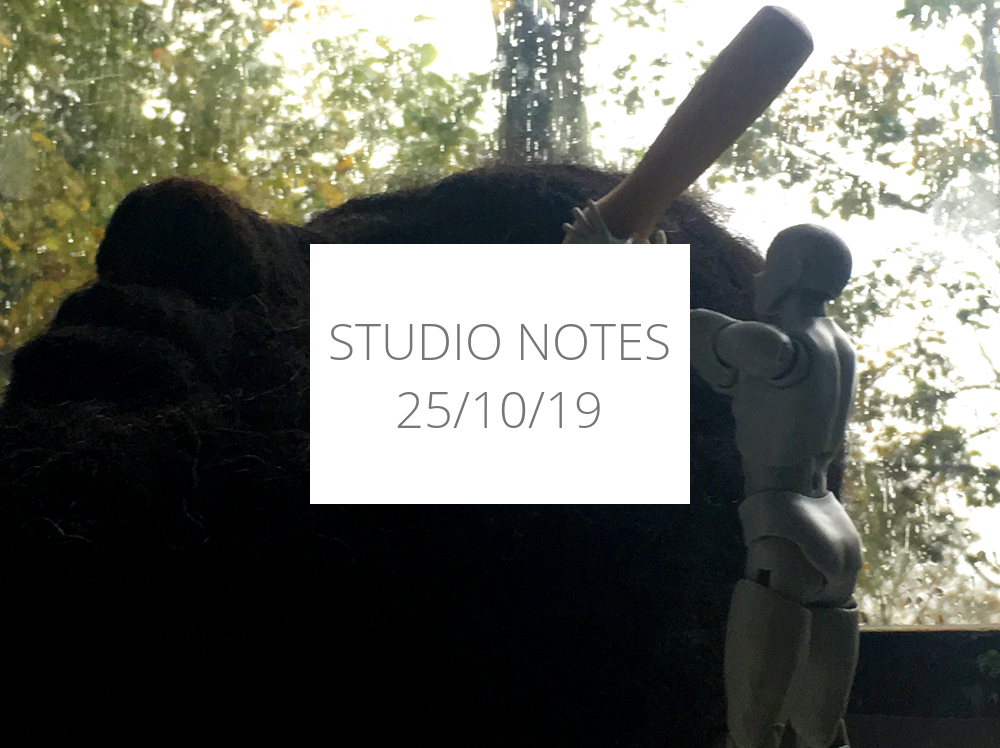 Studio Notes 25/10/19 - I've finally started developing my sculptural needle felting technique, and it's building real enthusiasm in me again for the work.

It was a bit of anyone’s guess as to how this week would work out, but I can see the floor again and the way ahead.

At last, I’ve made some significant progress with my wooly face, and it certainly has made the shift from a mostly oviform blob to a recognisable face. What’s really tickled me is the fact that the great leap forward took pretty much less than an hour.

I haven’t spent any time studying the technique of needle felting, or even watching any videos. All I’ve done is had a go and worked out what works and what doesn’t.

Now that I managed to work out the basics of firmly attaching forms to one another using only fibres, it seems so obvious, and I wonder why I didn’t work it out sooner. But I’ve also worked out that messing around with new materials until I finally get a breakthrough is the chase that really gives me the thrill.

There’s still a lot to figure out though, so hopefully next week’s work will show the results of some more enlightenment after I rest my wrist and arm over the weekend.

After my breakthrough I felt that rush of enthusiasm that was missing before, that made me want to seek out felt sculptors. I’d heard of Stephanie Metz before of course, but there are lots more, as you can see in this article and this list.

This week has made me rethink my plans for my practice…

I’ve been thinking mostly in terms of projects, which is something that makes perfect sense… like working in series, which I’ve never managed to crack, but I know is the “right” way to work.

But after ten months of screen printing, paper sculpture, pewter casting and needle felting, I’m thinking about changing that and just accepting my materials habit, and working on making as many iterations of a theme as possible in as many materials as possible. Maybe it’s the way to make the most of shiny object syndrome and have fun in the process?

Guest Post Scams: How To Protect Your Blog And Brand