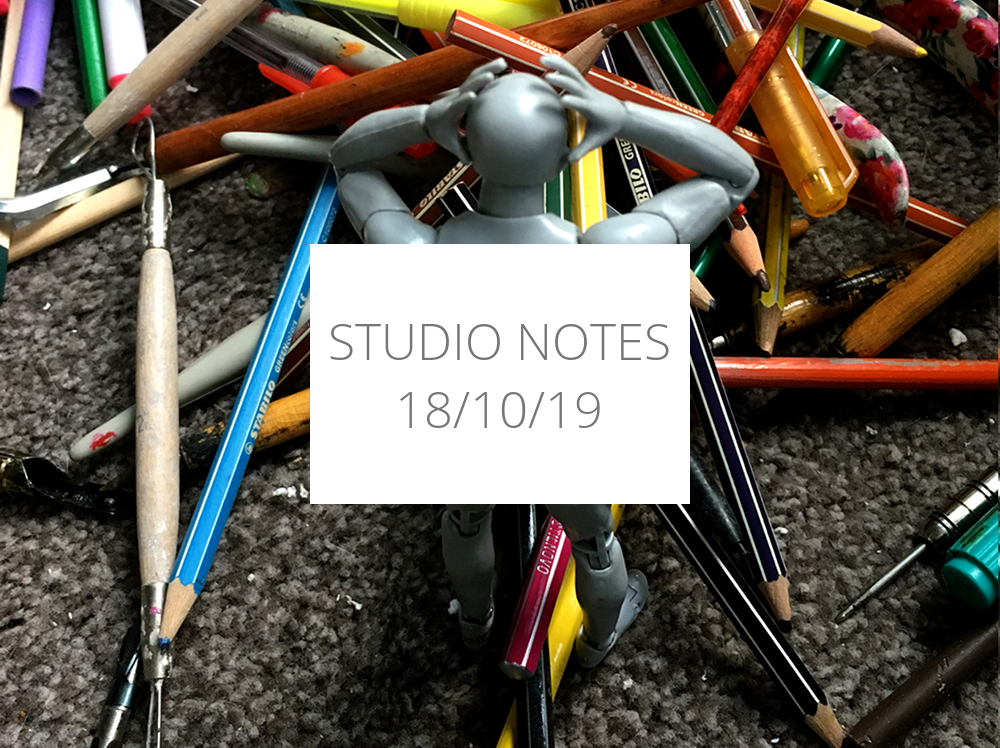 Studio Notes 18/10/19 - after a week of things not going to plan, will I be able to sort my studio out and get back on course with my work?

It got even worse – after the cat knocked over my stacks of trimmings and fringe and turned them into a multicoloured noodle soup on the floor, a bipedal domestic denizen came along and added to the chaos by knocking over another storage table.

I should learn something from the fact that all of these storage solutions were made from an old drum kit; the first setup to go down was made up of two floor toms stacked on top of each other, on top of my bass case. It was more stable than it sounds, at least before the cat came along.

The second table was a mashup between a sliced-down bass drum and a demilune table. It was more stable than you would think, before the human came along.

Picking up the pieces

It didn’t take long for the human to use his opposing thumbs to put things right (the cat never helped one bit), but the fact is that I’d spent ages meticulously arranging where each type of pencil, pen, marker, brush, chalk, charcoal and tool would go and then working out a system to find the thing I was after.

Now, I’ll need to start almost from scratch, but the thing is, now I’m wondering if I need to work out a less wacky, DIY-ed system that’s cat-proof and passing-by-human-proof.

Now I’m also wondering if I just have – I can’t believe I’m going to say this – too much stuff.

I might be able to have a go at this over the weekend, but it’s not looking very likely. My time hasn’t been entirely my own this week and next week looks as though it’ll be much the same, so it looks like the best option will be to accept the chaos and wait it out.

I think I might have to introduce a regular word of the week section, because this word has just popped into my head, and it’s precisely what I feel right at this very second.

Also, no-one ever says that any more, and having a flair for the melodramatic, I might as well claim it as my mood for the next hour.