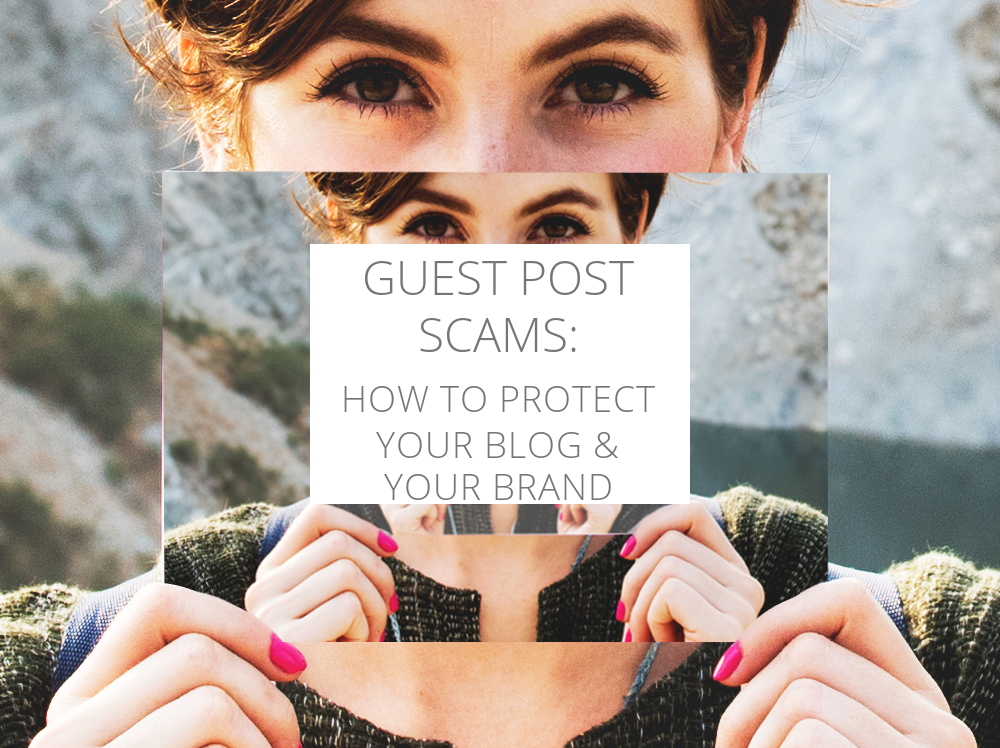 Guest post scams don't necessarily cost you money, but can be detrimental to your blog and your brand. Here's how to weed out fraudulent guest posters.

Guest post scams may be a new idea to you, but once you’ve got a blog on a custom domain with a few decent posts and a high enough DA (domain authority), you’ll start to get the emails.

They sound complementary and enthusiastic about your writing, and they say they want to publish a guest post on your blog. Should you let them?

While it’s always lovely to hear someone say nice things about your blog, there’s a good reason to be picky about who you allow to contribute to your site. That’s not to say that you should never say yes; but you should definitely be on the alert for guest post scams.

What are guest post scams, and does anyone lose money?

There are valid reasons for wanting to contribute a guest post to someone else’s site: guest posting is a longstanding, legitimate way to build reciprocal backlinks to your own site.

It can work out very well for both parties when it’s done right.

However, there are two ways in which a guest post can be manipulated for the writer’s gain, while pulling the wool over the host’s eyes.

It may not be a scam in the true sense of the word, as no money changes hands, but it’s disingenuous, duplicitous and shady as heck. You could be losing out on revenue, but you could also be sustaining damage to your reputation.

Here are the ways you may be conned by an offer of a guest post:

If you do this for long enough, you’ll encounter the offer of paid links. I won’t go into the ethics of accepting paid links on your blog, but there’s no right or wrong; it’s all up to you.

However, you have the right to determine where any links on your site go to and whether you will be paid for them or not.

[Read more – can you really make money from a blog?]

If another blogger receives remuneration for a link inserted into a site you pay to host, it’s as though they’re renting out a room in your house – the house you’re paying the mortgage on.

If they’re trying to slip this past you without your knowledge, then that’s dishonest and unethical. Don’t accept it.

How to spot it:

Sussing out whether a guest blogger has inserted a paid link might be difficult, but it’s generally a good idea to question any of the links that aren’t going directly back to their site or social media accounts.

Affiliate links are sometimes easier to spot due to their appearance; with both of them, hover over the link and read where it should go, and then click through and see where the link actually takes you.

The second guest post scam comes in an even more unethical, dishonest package – an email from someone who claims to be a fellow blogger or freelance writer, but who is actually an SEO looking to add your blog to their link farm.

I’ve had my share of emails from people pretending to be white, middle-class American mom bloggers, or young British freelancers. Scratch the surface just a little and it becomes clear that these people aren’t real; in some of my experiences it’s been glaringly obvious that they’re southeast Asian writers.

It’s a sad byproduct of our society’s racial prejudice that means that people who need to make a living feel they must resort to putting on a mask, but still, that doesn’t excuse dishonesty.

So how can you find out if the person on the other end of the email is real?

Three ways to spot a fake blogger or freelancer

1 – Check out their writing

You’ll have the initial email, and often, you’ll be presented with a few examples of their writing on other sites to show their ability and style.

2 – Do a quick search for them online

Any legit freelancer is going to have their own site as a portfolio, and be visible on some social media platform or other. After all, they want to be found!

People pretending to be an established blogger will naturally have a blog to point you to. Here’s what to look for:

Not every guest post request you receive is going to be underhanded, of course. Plenty of up-front bloggers with link-building on their minds are going to approach you, and that’s ok, if you think it’ll be mutually beneficial.

Find out more about blogging for artists and creatives here.