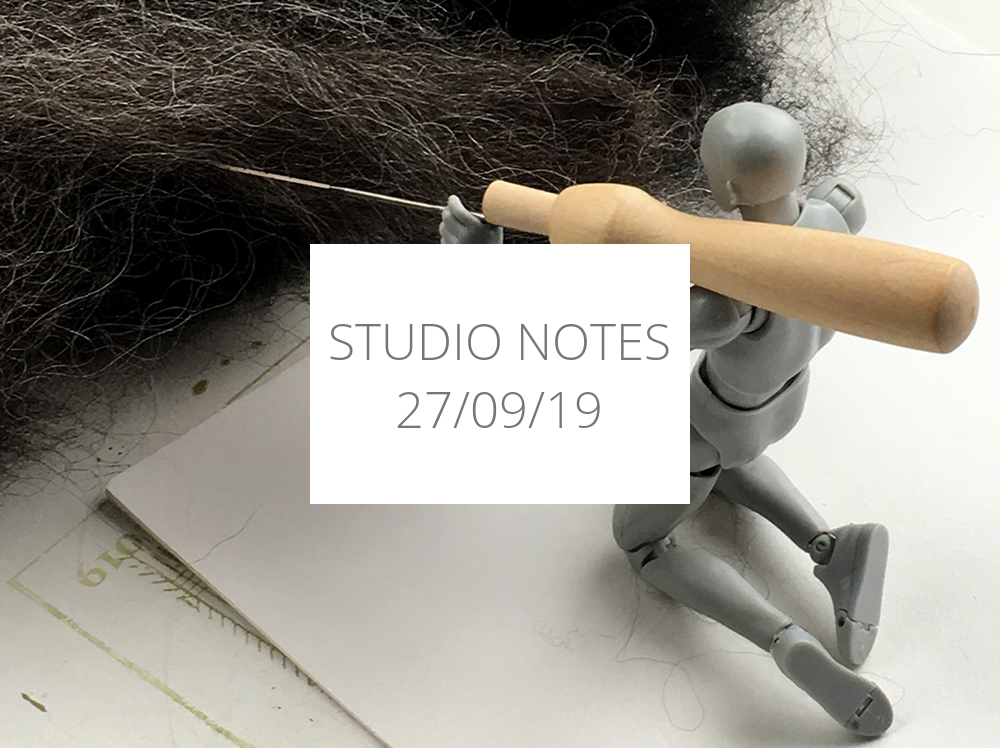 Studio Notes 27/09/19 - I've washed the fleece and tried carding the wool, and now I'm moving on to needle felting, despite my cat getting in the way.

Ever get that feeling when you want to run away from the monstrous mess you’ve created, but you can’t, because you’ve filled every room with wool?

Ok, so it isn’t every room, but my bathroom needed a major clean after the previous week, and the landing carried a trail of black curls leading away from the traumatic event.

My studio was chock full of wool drying on racks and any free surfaces, which was as much as I needed to cope with, but then along came the cat.

I’ve got three, but I’m sure that I know the identity of the guilty culprit: he has form and his modus operandi fits the crime scene.

The accused cat decided that it would be a fine time to turn out my potted plant, grind the contents into the carpet and pee in the remains. Twice. He did this twice this week. Now my studio has a heady mix of scents that shouldn’t be experienced by anyone inside their own home.

Needle felting and the results of carding

Carding the wool with the pet brushes worked out ok, I suppose; the real impediment is probably just my shoddy technique, but even with that, I still ended up with some decent tufts of wool running in approximately the same direction.

It hit me that carding the wool was probably the wrong thing to focus on if I planned to use it for sculpting though, as I only need decent strands for the uppermost layer, not the body of the form.

As I had enough to deal with I decided to try an experimental short-cut and throw one of my fleeces – the shortest-haired, most matted one – into the washing machine to purposefully felt it. I tried it on a 15 minute cycle, which didn’t do much at all, and then on a 60 degree wash.

This did the job of felting it , but it didn’t turn into one big ball; more of a shrunken version of its former self. This will be the basis of the head I’m going to sculpt, but I won’t wash any more this way. It just means I have one less bag to smell.

To crack on with the job, I bought a cheap needle felting kit on Amazon*, and I’m really pleased with it. Sure, the needles won’t last long at all, but I doubt I’ll be doing much felting once I’ve finished this piece. As long as I have enough to get this job done, I think I’ll be happy.

Using Art As A Mindfulness Exercise