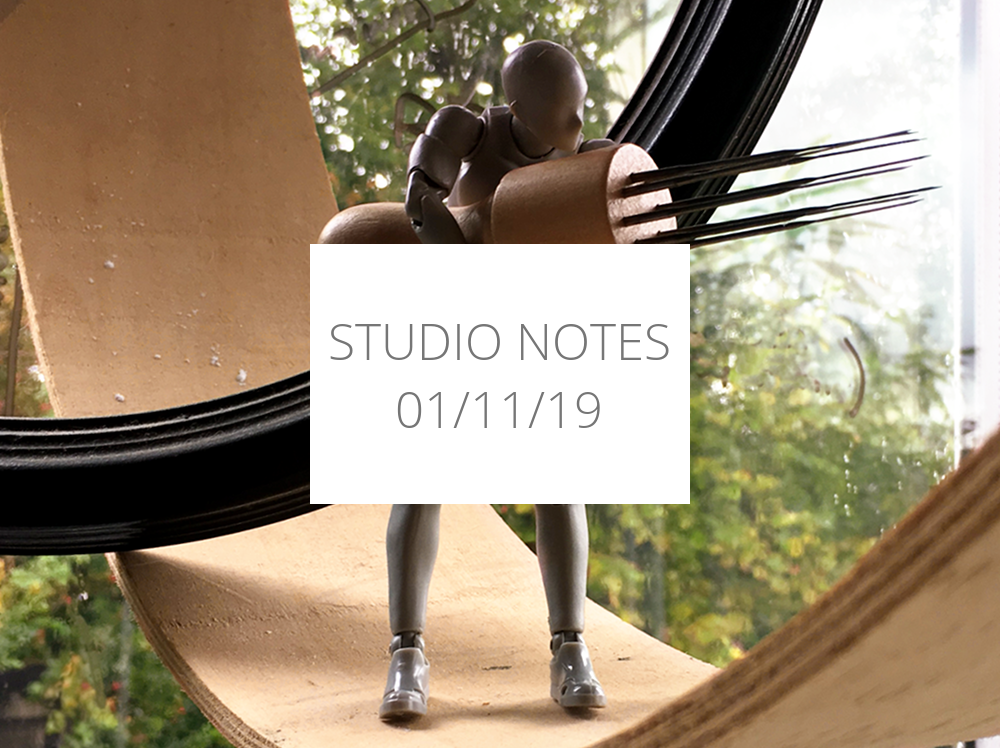 Studio Notes 01/11/19 - I've been adding more features to my felted wool sculpture, but I'll have to start washing and carding more wool before I run out.

This week I started to connect a flimsy neck to the bulk of my woolen head of Medusa. Now that there’s a nose, two rudimentary eyes and recognisable lips, it seems right that there should be some kind of bodily grounding.

The challenge – ok, the entire thing is a challenge because I’ve never done this before, so let’s say the main challenge – this week is to use what clean wool I have as wisely as possible before I run out.

Back in September I started the process of washing and carding the fleece, which took a long time. I ended up handing one fleece over to science (kinda) and putting it into the machine to see if it would end up felted solid, so that I could use it as the core of a head. It didn’t really ball up, so I tried sewing it into place and dry felting it.

A couple of weeks ago I said I’d just put my felted fleece back into a hot wash if it wasn’t playing along – well, I did, but the ball shape didn’t hold and I had to start again. That wasn’t a huge loss though, as I had a better idea what I was doing the second time around.

The problem I have now is realising that I’m about to run out of both felt blobs and clean, carded wool fibres.

Apart from that, I sorted the grey fibres separately from the black and dark brown, so that I might be able to use them to “draw” across the dark surface. So that limits the amount I have available for sculpting the base. Time to start washing again.

I’ve still got two bin bags of raw fleece, and they’ve also got that frowsy stank going on from when they were washed before and hadn’t dried properly. Washing is going to have to take place on a little-and-often basis, using the plastic tubs I bought for the purpose, because there’s no way I can physically cope with washing large amounts, and I’ve only got so much room in the studio for drying the stuff.

Back to what I can physically cope with – I’ve learned that needle felting hunched over for ages will do a number on your neck and shoulders, so the little-and-often approach is for working on the stuff as well as washing it.

A new annual project in the works?

Looking ahead, I’m toying with the idea of doing 52 self-portraits next year in 52 different mediums.

The idea is to just celebrate the medium, enjoy the challenge of learning new things, and force myself to stop chasing perfect outcomes. Nothing I do is ever finished in one week; it’s always a complicated, drawn-out process that takes me months or years.

I do enjoy it, of course, but it can stress me out sometimes… and sometimes it means that I can spend years thinking about doing something without ever starting.

With this idea, I’m hoping that I can focus less on mastery and more on exploration, and maybe refine concepts through becoming less refined in practise.

The Sunk Cost Fallacy And Art