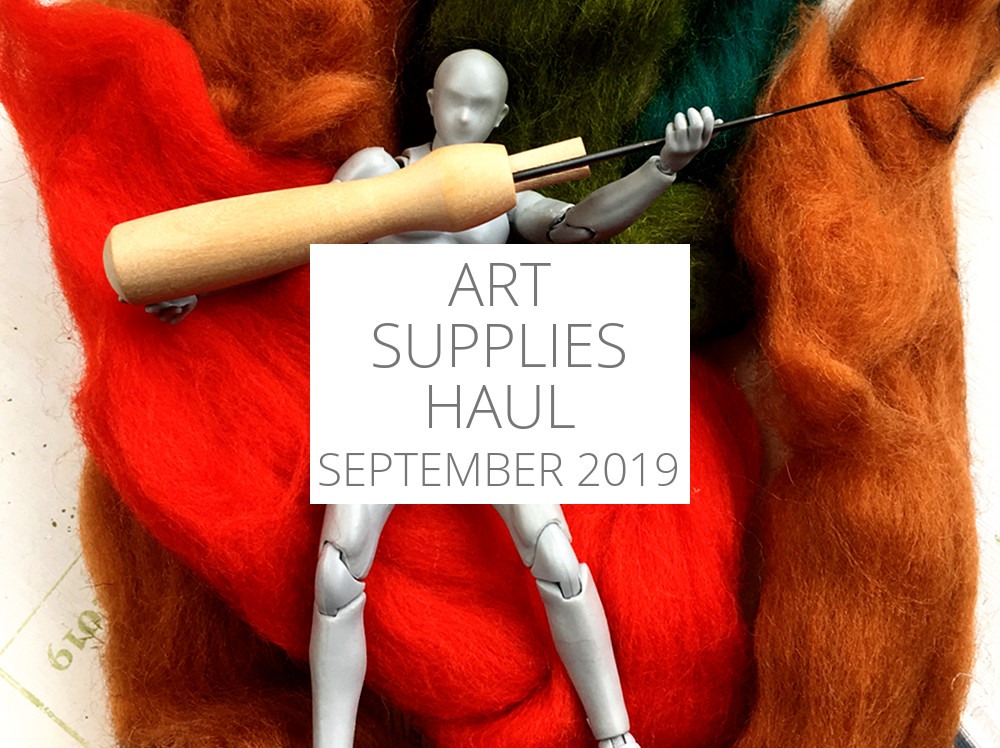 Art Supplies Haul - September 2019: a look at the supplies I bought during the month, and how much they cost. This time it's an introduction to needle felting!

I really hadn’t planned to buy anything in September as I wanted to try to save up for some bigger buys (and more silicone). However, the offer of a sack of raw fleece was too much to resist.

The fleeces – 3 in all – were free to me, but I did get a few things to make processing them easier. Here’s what I got:

After finding myself with a lot of wool and in need of a way to make it into art in some way or other, I bought a basic needlefelting kit on Amazon*. It was really just to make a start on this project and then see how I felt afterwards; no point in spending loads before I knew whether I would enjoy it.

I decided I needed a single needle holder as well as a multiple needle tool, and lots of needles in different sizes. The needles were definitely going to break and I didn’t want to bother with waiting around to get more.

It cost £13.99 and came along with extras such as foam, snips, a little awl and finger protectors, which I thought was pretty decent. However, the multi needle tool is fairly dreadful. It works, but it’s connected by a double-threaded screw, and you’ll probably have to glue it into the handle as I did before trying to tighten it up.

The fleece still smelt extremely sheepy and needed a lot more washing, but I didn’t want to use the bathtub again… we were all traumatised by that adventure.

Instead, I bought two big plastic containers from B&M Bargains. They’ve been a great buy because I was facing a domestic disturbance over the amount of wool popping up all over the house. Now it’s been herded into the boxes for storage and everyone’s happy.

I also bought another pet slicker brush* to act as a cheap-o wool carder along with the one we already had one at home (three cats and all). The brush and boxes came to £9.99.

Total: £23.98. I don’t think that’s all that bad, but it was also an entirely unplanned detour into a new medium. But I’ve really enjoyed it and I may well carry on with needlefelting, so I think it was well worth it!