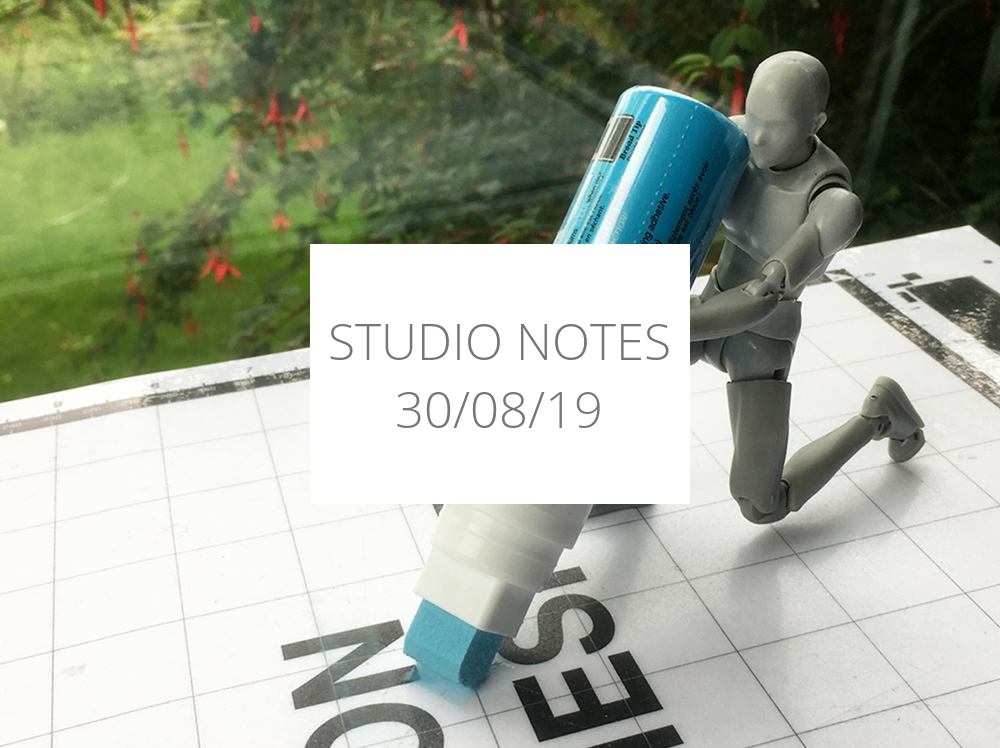 Studio Notes 30/08/19 - worrying about having something to show for my week has led me to rush through jobs - is it worth it?

Sometimes I think that updating a weekly journal of creative accomplishments is a bit much. Other times I think it’s the only reason I get anything done.

It’s only because I realised all to soon that Friday had rolled around yet again and I hadn’t got the jump on anything I’d planned to work on that I got moving so I could come here and write, “look, I tried!”

Feeling a bit sleep deprived after a weird night dreaming about floating on a canal on an algae-covered airbed, I decided to stress myself out a bit more by speeding through the creation of some new SVG files in Inkscape. The problem is, I’d forgotten how to use the thing in the months that had gone by since the last time.

Finally I got something out of it, and while the Scan N Cut was working away on the new files I had a go with my fancy new Zig glue pen, which I decided to buy instead of the other mat adhesive I was considering last week. It’s definitely the easiest option for retacking a cutting mat, even if it isn’t the cheapest.

Just to add to my stress levels I thought I’d take the bull by the pointy old horns and sort out my web hosting dilemma. I don’t feel sorted or any less dilemma-ridden right now though, just more stressed – big wow. Hopefully by this time next week I can laugh about how easily I rose above it all and spent the previous week gluing random things together in my most carefree fashion, free of weird dreams and the need to obsessively compare hosting packages.

And now, having read all of that back, I realise it’s time to give up and just admit that this week I mostly scroll-cut skirting boards for my bay window and didn’t have much energy for anything else of my own. Maybe next time.