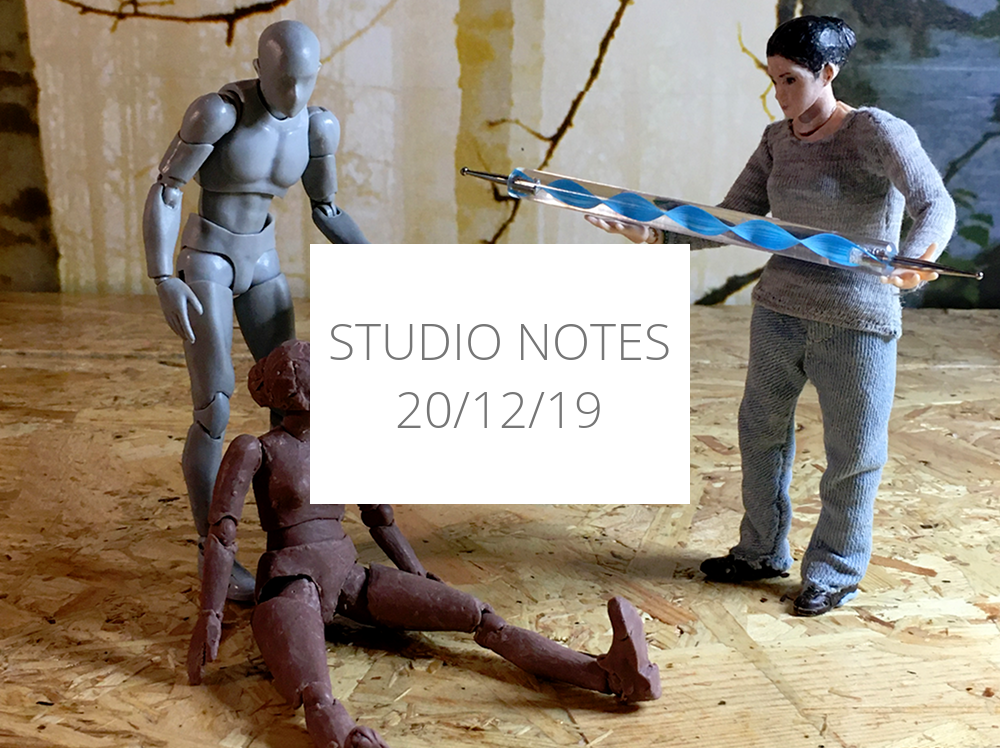 Studio Notes 20/12/19 - This week I've made my first rough version of a ball-jointed clay figure, so what do I have to do next to make the real thing?

Every time I feel as though I’ve made a great leap forward with modelmaking, I realise I’ve got another mile or so to go. Still, I’ve made my very first rough version of a ball-jointed clay figure, so that’s some major progress to be pleased with.

I made this first version with Monster Clay*, which was an absolute necessity: it meant that I could melt the clay down to pour into the tiny moulds I made from my kitbashed figure.

Then I could carve into the clay and add more on where needed, which is something I couldn’t do easily with the wax I have.

The figure really wasn’t ready to be put together, but I just had to see it… or maybe I had to make it look like I’d actually achieved something this week!

How do I turn this into a real figurine?

From here I have to to take it apart again, refine each part (especially the hip/thigh joints, as they don’t really fit at all) and make moulds of them.

I would prefer to use a poured silicone but I don’t have any left – it’s going to have to be a press mould made from silicone caulk or maybe plaster of paris, because it’s pretty much what I’ve got, and I need to save some cash for a big purchase in January.

Maybe I could use my Composimold, but I’m a bit wary there because it melts down so easily, and if I want to try pouring more Monster Clay into it, it’ll surely turn into a mess just like the time I tried pouring wax into it.

Once I’ve got another, more final (because they’re never final with me) mould then I’ll cast it in resin.

Again, I don’t have any resin yet… so my options are limited as to what I can make my end prototype in right now. I guess that means that this little diversion will have to wait for a bit, which bumps my delayed project count for 2019 up to levels I don’t even want to say out loud.

Bookbinding is this week’s distraction

Moo make the most beautiful notebooks*, and I promised myself that I’d buy one and actually write in it for a change. However, when I got to the checkout, I realised that I had to pull back because the 3D printer had to take priority in my budget.

So why not make a notebook, right?

I have a few signatures made up and ready to go, and it’s funny to come back to this after doing a little bit of bookbinding back at the beginning of the year. This time I’ve been watching more tutorials so maybe next week I’ll have at least one book made as a nice present for myself.