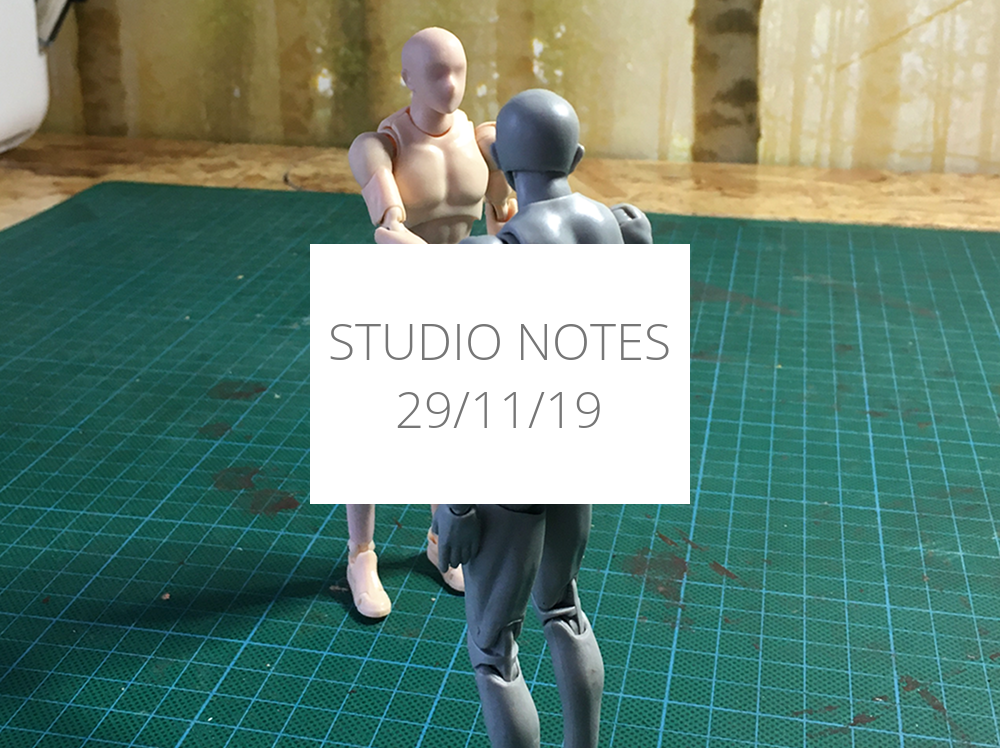 Studio Notes 29/11/19 - it's time to embrace kitbashing, as I've started customising a knock-off ball-jointed figurine to better learn how they're made.

My second attempt at the knitting machine ended up in a tangled mess but don’t watch dat, watch dis – I found a new rabbit hole to fall down!

I’d say that my new Body Kun figure arrived, but in truth, it’s a blatant rip-off of S.H. Figuarts’ original drawing figures. I kinda knew it might be; I mean, the originals are priced over a hundred quid, and that’s not what I paid…

So I was expecting it to be a bit trashy and hoping for the best, and when it finally did arrive, it was just a bit trashy (ah well!) but not too bad. And it doesn’t matter, because I specifically bought it for kitbashing.

There was no way I could justify buying a high-quality maquette only to chop it up and take it apart, so the knock-off was just bad enough to let me play Frankenstein guilt-free.

I mean, I do still feel guilty about the Chinese companies’ blatant copyright infringement.

What I was thinking about for a while before buying this figure was making my own ball-jointed figure, but I couldn’t help but wonder whether starting with a ready-made reference wouldn’t be better.

I mean, the articulation points on the Body-Kun dolls are amazing, and at the very least I would be able to customise the figure, learn how it worked, and maybe cast some new hybrid pieces.

My first goal was to trim down the shoulders as much as I could, and then I had to add a bit of belly, bamsy and thighs to make a woman out of him. After almost a week of dremeling, I’ve managed to get close to the proportions I want, but the existing joint placement means I have to put up with some constraints.

When I make my own version I’ll fix that.

It’s not even a problem.

Not long ago Ste and I were chatting about the toys we played with when we were kids, and I told him about my town full of Barbie dolls, with its intricate social setup.

It didn’t take much to realise that despite the well-deserved hammering Barbie has taken for her role in stymieing the feminist cause, she was still a useful social projection tool, and I absolutely loved her. Until I didn’t. But any doll is a tool for projection, and look – I’ve been doing it all over again for almost a year.

Now I’m happy to embrace the idea of making a series of mini avatars and letting them populate my new town, in the sure knowledge that they come to life when I’ve gone to school work.

My model’s very altered now, with hair, boobs, thighs and painted-on underwear (matching, because my mother would want it that way). I’ll wait to show you the end result and then write up about the entire process.

You need you some Crafsman

If you haven’t seen The Crafsman on YouTube, you’re seriously missing out. I’ve been bingeing on his videos all week and can’t believe I’ve gone without them for all this time.

It’s the perfect combination of information, fun and good vibes – probably just what’s helped me to relax into working small and think more about playing than working on projects, and that’s been exactly what I needed.