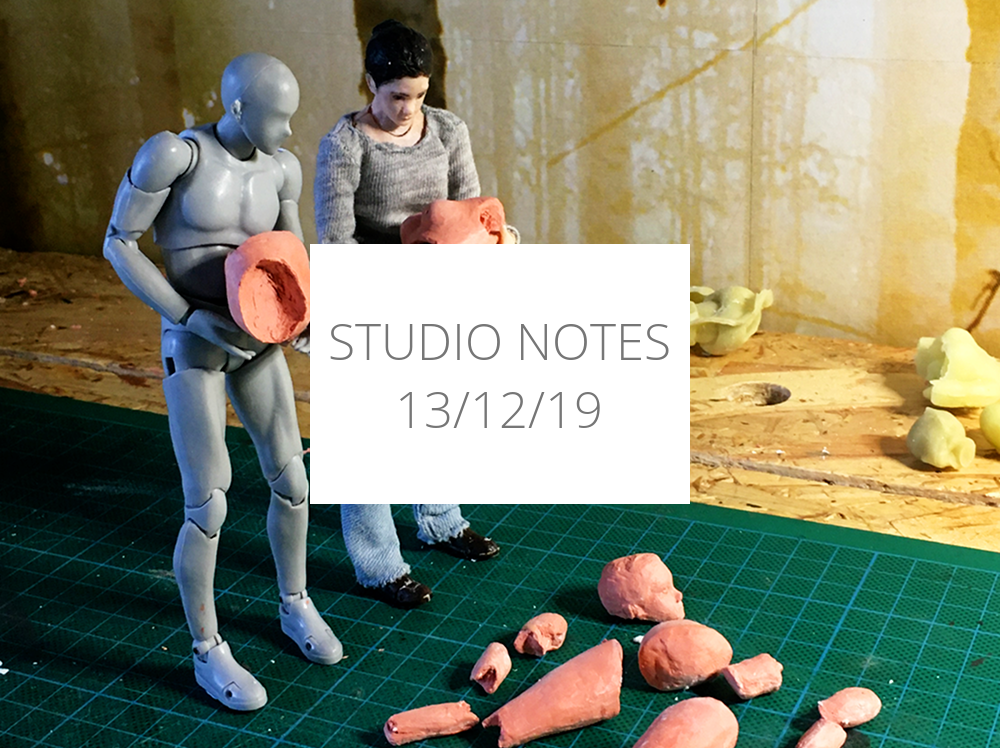 Studio Notes 13/12/19 - the tiny head sculpture I made for my kitbashed figure was lost - or was it stolen by a saboteur in my own studio?

This week I lost my head.

The figure I carved down and built up into a female shape had been moulded whole in silicone, then the cast was cut up into parts ready to separate into limbs ready for assembling with ball-joints.

I’d sourced some cheap acetoxy cure silicone after running out in the middle of mould-making, and after a tedious journey to pick it up, sat down at my desk to get my figure’s pieces into place… but the head was nowhere to be found.

Every crevice, cranny and crack that I could imagine the little head rolling towards was turned out and inspected. A day went by and I’d worn my knees out with scurrying around, peeping under desks and tables. Still, nothing; I was starting to think that I hadn’t lost my head, but that it had been stolen.

The suspected saboteur was, of course, Mohawk. She’s the cat who loves to play fetch and football with milk bottle caps, and regularly raids my studio to steal the sponges I use for clay.

Even though she has form and I wouldn’t have put it past her, I didn’t have proof. It took a wearisome evening of triple-checking every possible place the little thing could have bounced, rolled, been thrown or vacuumed into to rule out my own error.

When I finally pointed the finger, I uncovered the stolen head behind a suitcase near the cupboard where Mohawk’s other plastic finds eventually end up after a game of cat football – just knocked out of paw’s reach and out of sight.

It’s not the first time I’ve found myself grinding my teeth in despair at the machinations of my furry overlords, but it’s definitely the first time one of them has actually stolen something I’ve been working on.

Obviously security has to be increased as I start to make more enticing and portable pieces.

With my poor little figure reunited with her cat-nibbled head, I can concentrate on the moulds I made, but I still have to look at what to use to cast the replicas. Right now I don’t have anything I’m very keen on using – just wax – but I want to buy a pack of Monster Clay to use for this purpose.

This weekend’s job will be to get the mould cleaned up and try casting with whatever I can, but after the week’s misadventures, I think I’d better try casting a lot of replacement heads.