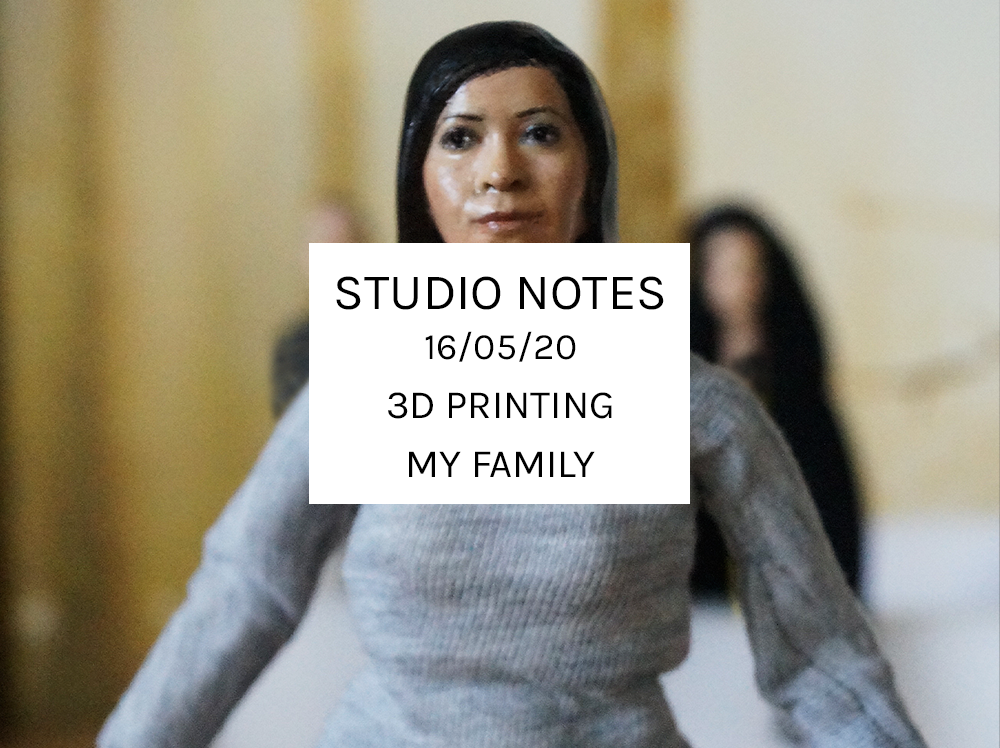 Studio Notes 16/05/20 - I've finally got around to 3D printing my family, and it's exciting to finally see them emerge from the resin vat.

After my first attempt at 3D printing myself and then refining the process to a good portrait, I finally started 3D printing my family to round out my cast of characters.

The workflow took ages at first, but now I’m pretty fast at it. I’m sure that I could make even better portraits of them if I go back to it in round two, but even so I think that a lot of the portrait development happens in the painting stage, which is extremely fiddly at this scale. Time to get my magnifying glass out

As soon as I found out about the software to 3D print myself back in January, I took pictures of my husband and son to do the same to them. We still remembered seeing the ASDA 3Dme service years ago while doing the shopping, but never tried it. After I worked out the basics of making portraits and then low-poly figures, I wanted to use my little avatar for stop motion tests, so the rest of the family came after that was done.

It was so exciting to see them emerge in front of me on screen and from the resin vat!

It’s exciting to have a larger cast of characters on hand, but in truth, I’ve only got two more heads! The bodies are still in the design phase, and I don’t even know if I want to print them yet.

I’m hoping to get hold of some Siraya Tenacious resin to make my joints and body pieces stronger, but it’s out of stock everywhere in the UK – possibly because of the lockdown situation. Rushing it doesn’t make much sense, so I’ll try to make the new body parts out of whatever materials I have here.

Most of the movements I need for animation are subtle, so not having the full range of joints might be a better idea than the extra-bendy, hard-to-control figure I have for myself. Will I end up going down the route of wire-jointed puppets for all of them, wiping out all of the design work I’ve done? I don’t know, but I probably am that crazy.