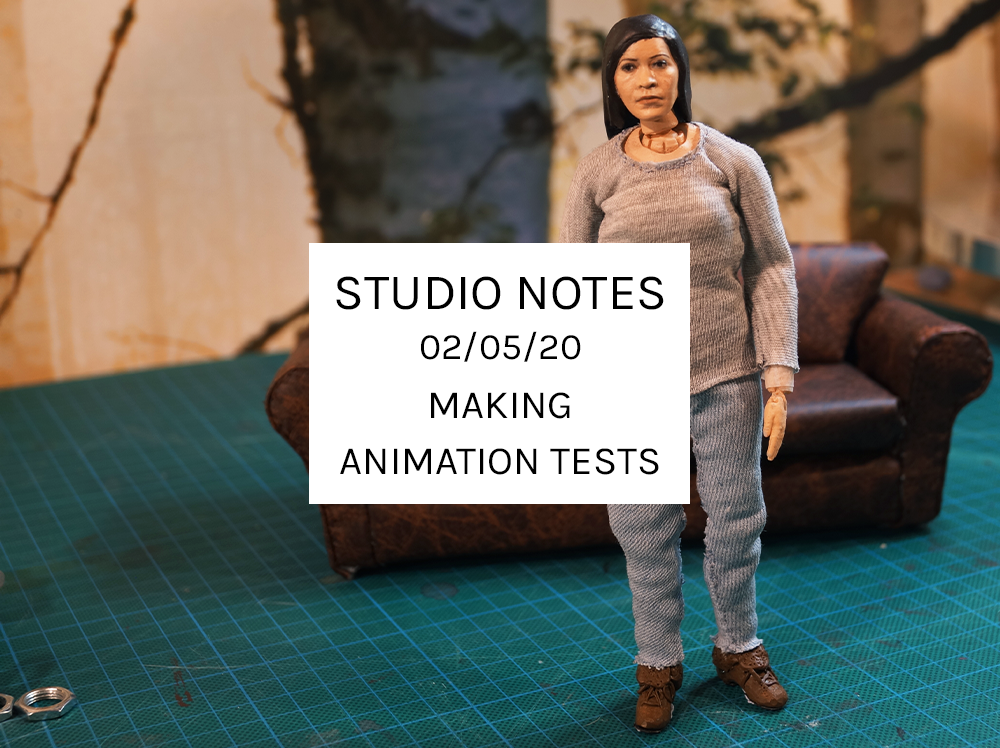 Studio Notes 02/05/20 - I've been making animation tests in the studio, but the results have been disappointing. I'll need a lot more practise and patience.

Still, I tried. I went straight at it without a script, a plan, or an armature. The good thing about it was being able to see just how the figure works for animation and what I can get away with without an armature, and test out my camera options.

Everything that went wrong: well, my DSLR wouldn’t connect to the laptop so that left me having to use an app for onion-skinning and taking pictures alongside using the DSLR as a second camera. My phone’s rear-facing camera had died so I thought I might as well see what the front-facing camera could do, as I already had the same app installed on it. Three cameras doing their thing for each frame is a good idea, right?

The problem was that I got so fast at triggering the remote shutter and then tapping the next two screens that my hand got in the way of the light several times, causing a lot of flicker.

Not having a plan meant that I was making it all up as I went along, so there was really nothing behind it. Still, it was only meant to be a test run, and I got to see whether I could pull off several cameras at once. Technically, yes, but I’ll stick to two instead.

So yes, I did learn something. Besides that, I got to get in some much-needed practise with using Adobe After Effects to animate it. Basically, I’m at the stage where I have to google every single process because I don’t know what I’m doing, and google it again the next day because I’ve forgotten what I did.

Instead of playing around with all of the things the software can do, I’m staggering through the bare basics of lining things up and exporting something that looks like a video. I guess I’ll get there eventually, but only through making a few bad videos at this stage. It’s still a bit better than my very first attempt which lasted 3 seconds and my foray into green screens.

There’s a great big part of me that doesn’t want to share anything that’s not really up to scratch, but I’m hoping that this will be something I look back on in a year’s time and can hold up as evidence of how much I’ve learned.