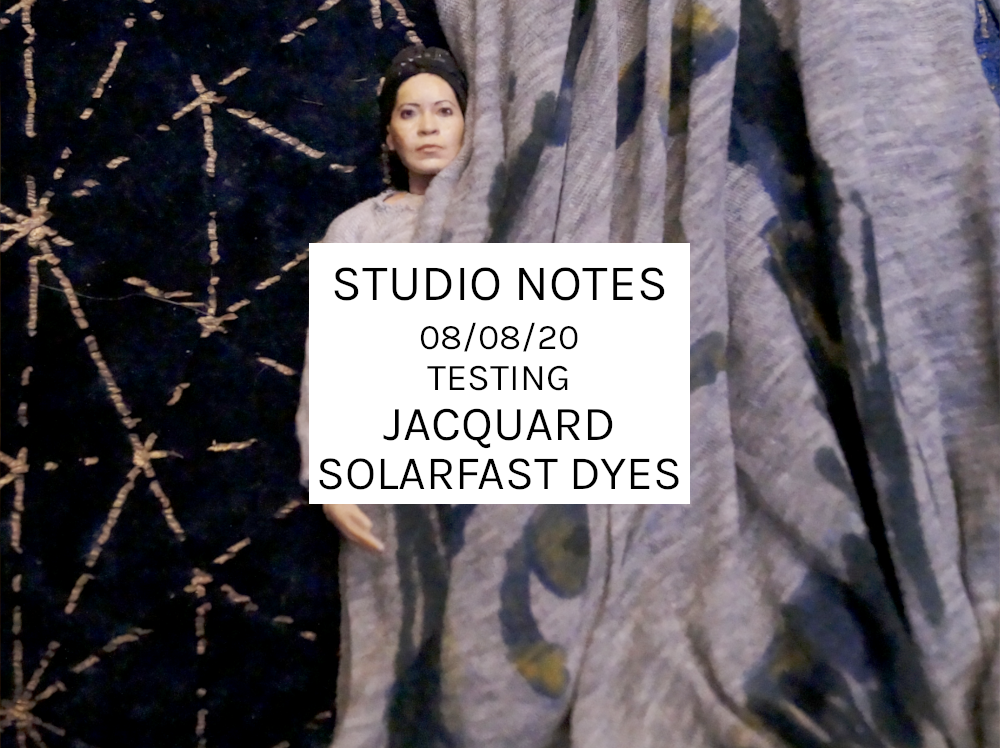 Studio Notes 08/08/20 - It's been a long time coming but I finally got another sunny day to try testing Jacquard Solarfast dyes.

It’s been a long time coming but I finally got another sunny day to try testing Jacquard Solarfast dyes.* I started these tests way back in June but wanted to see if they could be improved.

When some good weather finally arrived back in June, I hustled to try out my Solarfast dyes as it had been a really long time since I’d bought them and I hadn’t done as much as I wanted to with them.

I really didn’t have anything planned for this, and that week I was busy casting my 250 pewter coin.

I scrambled to find something to use as a stencil, and found a cut paper stencil I made back in February.

The black, yellow and green dyes developed beautifully, but avocado was a weird mess.

The grey cotton piece was the better of the two – so much so that I tried to go back in with dilute black dye to improve it, but it looked like a lost cause and I didn’t get any photographs of the finished result. Then, when I saw the sun come out (over a month later!) I thought I’d give it another last-minute, poorly-thought out attempt at filling it in with dilute green mixed with black applied with a squeeze bottle.

Basically, I ended up with something that looks like the Ecaf Mammy. So that’s not getting to see the light of the internet. Although it wasn’t a great improvement from what I did earlier, I worked out some new ways of applying the dye that I hadn’t tried before, and at least I’ve added some techniques since my first shot with Lumi Inkodye.

Oh, and now I can say with certainty that you shouldn’t buy that avocado dye.