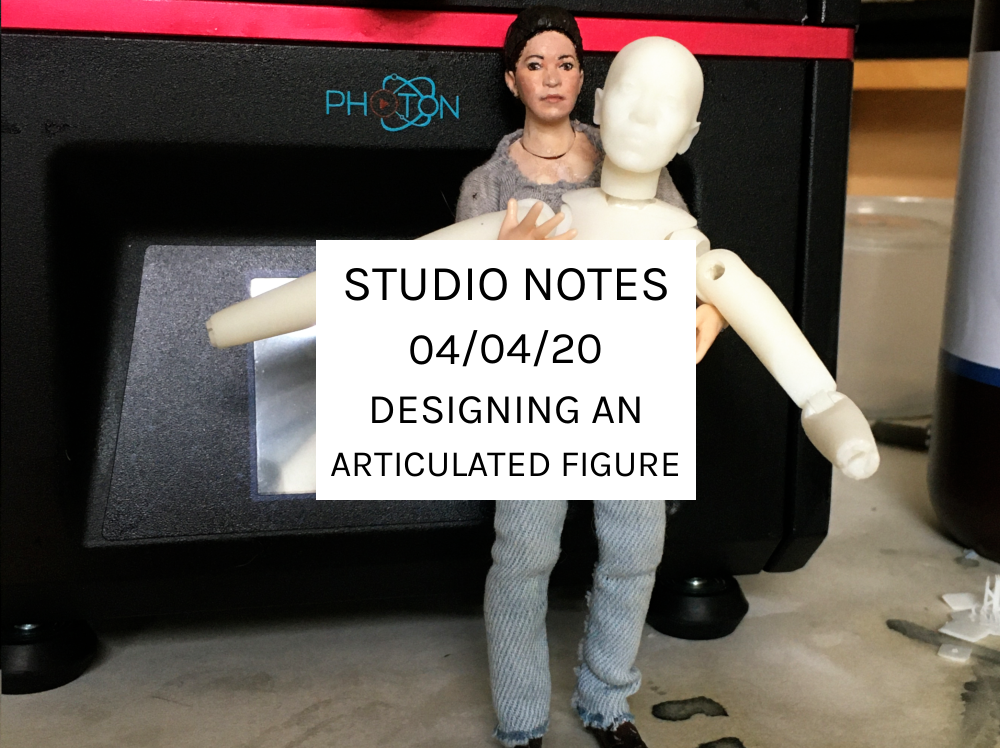 Studio Notes 04/04/20 - For weeks now, I've been chipping away at designing an articulated figure of myself, and now, I've finally gotten to the point of printing a prototype.

For weeks now, I’ve been chipping away at designing an articulated figure of myself. I’ve finally gotten to the point of printing a prototype, and I’m amazed at the results so far.

Designing joints is harder than it may seem

When I started out with the idea of 3D printing myself, it was using Facebuilder to create a head, and grafting it onto a different figure’s body.

The male figure body I had kitbashed into a female figure still had too masculine a shape, and the hunt for a printable female figure led me to different files that were beautifully designed, but didn’t fit my proportions either. Even worse, the joints were designed for the inherent spring in PLA filament, not for the rigid, brittle resin used by our Anycubic Photon* (and all standard resin printers).

I did a lot of pleading and bargaining with my prints, but almost all of the joints broke. Faced with starting from scratch or buying more flexible resin, I decided to put the time in to learn to make my own custom joints from scratch.

The good thing about starting from scratch would be that I wouldn’t be copying or appropriating anyone else’s work, and that I could create the proportions I wanted, creating a true portrait. Also, I’d be teaching myself to make the things I needed instead of hoping that someone else would.

My first step was to keep it as simple as possible, and to do that, I created very basic, low-poly limbs to block out the shapes and place the joints.

This has been a huge process, for me, going from no experience to a full figure, so I’m going to publish my steps for creating the joints in future posts and link to them from here.

As for my weekly portrait, it had to be the head sculpt I made in Blender. I’m proud of my progress – it’s leaps and bounds on from my first attempts using Facebuilder and I’m feeling much, much more confident.