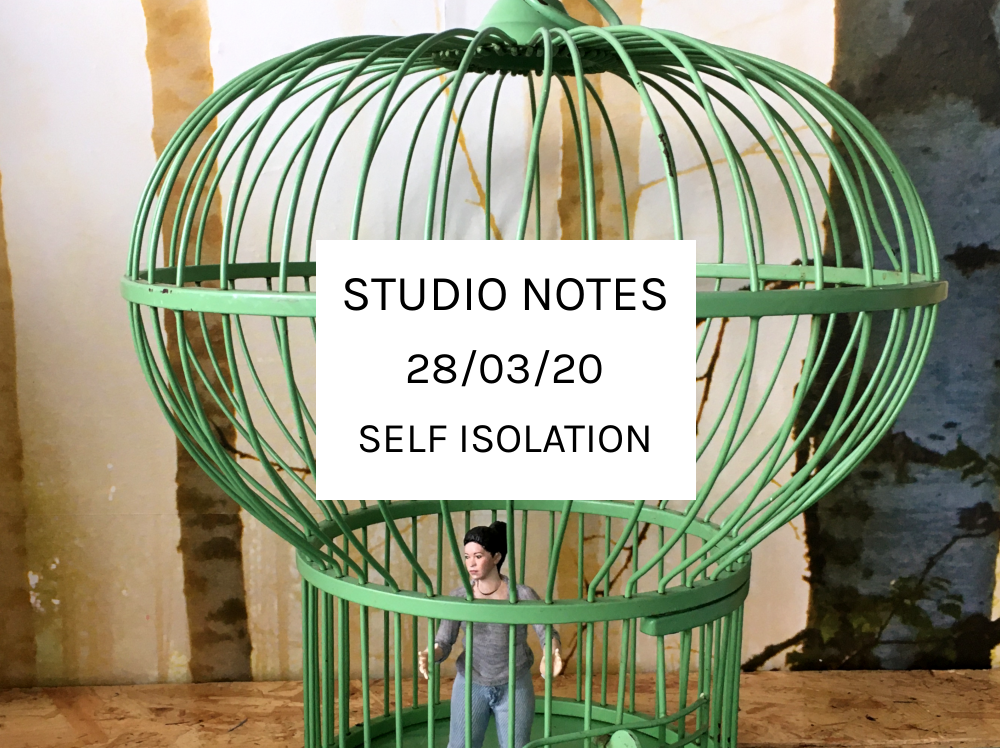 It might seem strange to talk about a week's work in terms of where I haven't been, but self-isolation has given me insights into my solitary art practice.

It might seem strange to talk about a week’s work in terms of where I’ve been – or not been – but self-isolation has given me a few insights into things I’ve never examined before.

Most of the world is under some kind of restriction on movement – whether it’s a full lockdown or more lenient guideline on social distancing. Since the UK government’s lockdown, I haven’t left the house at all – no perambulating far and wide for me. Thanks to a cough, it’s best for everyone that I don’t risk it.

Really, I’m such an introvert that the entire thing hasn’t ruffled me in the same way that it has some other people, but if our lockdown situation persists then I can see that changing. All of my creative work was done from home already, so I actually feel a bit more pressure to make even more of my extra time at home while I still can… but again, I can see that changing. I’m in no danger of getting bored anytime soon though.

It turns out that I’m actually content with having such a solitary, internet-broadcast practice; nothing about the production and dissemination of my art has changed.

Even if you don’t mind being at home, there’s the persistent anxiety that surrounds daily life. We’re in a situation that most would have thought to belong squarely within the realms of fiction – in fact, a few months ago my son told me about a story he was about to write entitled “Brace Yourself”, where a teenaged protagonist has to traverse a post-apocalyptic land in search of an orthodontist to remove his braces, oblivious to the extreme suffering of others caused by the breakdown of society as he goes about his banal quest.

This week his orthodontist called to cancel his appointment.

Besides the anxiety that comes from literally hiding from a plague, there’s the feeling of powerlessness that comes from knowing that you can’t help your friends and family far away – thousands of miles away, for me. My mother told me today that her uncle Joe, with whom she had only recently reunited after his emigration to the UK in the 1960s, had died from Covid-19 on Thursday.

None of this is normal, and it’s difficult coming to terms that it might become our new normal for a time. Opinion pieces and predictions proliferate in the media, but we really have no idea what’s next, and that’s extremely hard to deal with.

As for my own unsolicited predictions for the future, here goes: a giant leap towards a cashless society to cut down on cash-in-hand tax fraud as well as hygiene, a greater interest in Universal Basic Income, and of course, greater inequality, because that last one’s the general trend.

The ups and downs of lockdown

Having my family at home all of the time means that my attention is fair game for whatever they’ve got going on, because from the other side of the laptop, my writing work looks a lot like farting about on the internet, and my artwork looks too much like fun to be considered work. Now that my husband is home all the time he knows when I’ve been skiving off my physical therapy exercises and can crack the whip, which is probably a good thing all around.

For now, it’s all ups and no real downs: we’re healthy, we all get along, we’ve got interesting things to do, and I don’t think we’ll run out of 3D printer resin before this is all over. Long may that continue.

My portrait of the week is another linoprint made with block printing medium and oils, but with a block made of salvaged lino scraps. It’s alright. Not transformative, but at least it answered a “what if I tried this” question.