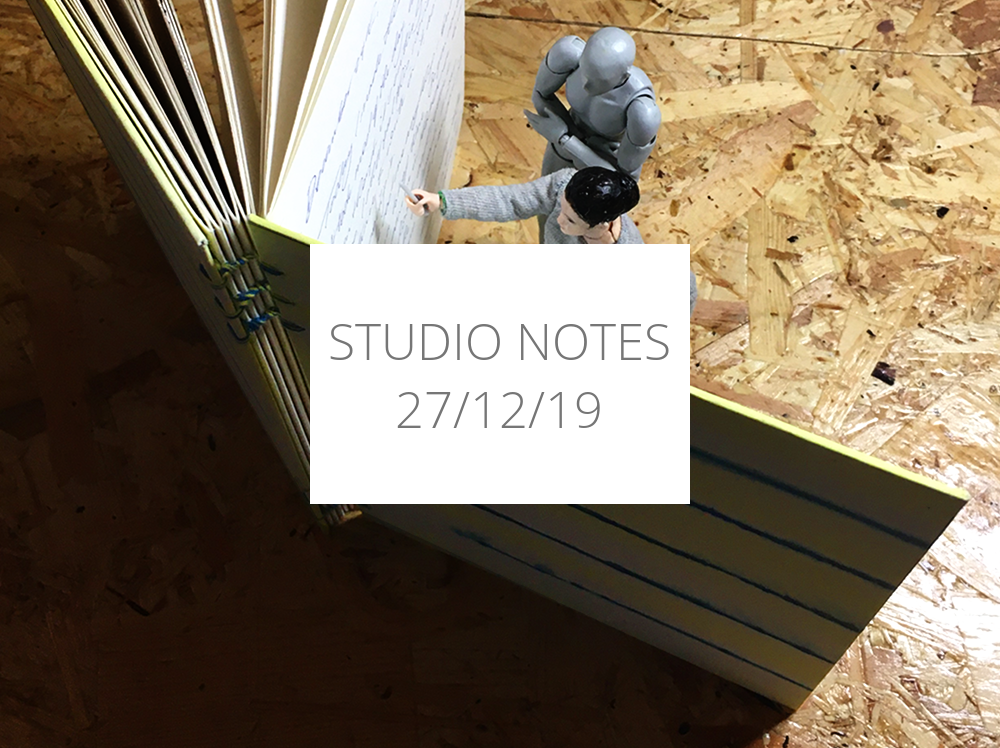 Studio Notes 27/12/19 - looking back on 52 weeks of art blogging, it's been an amazingly quick journey through lots of different media and projects in 2019.

It really doesn’t seem as though a year has gone by since I started writing these weekly posts – well, the first one was written on the 4th of January this year, and while I didn’t know if it would be a good idea to generally ramble about my week, I thought that having a deadline might give me a kick up the butt.

It definitely did, but that wasn’t the only reason to write.

When I wrote the first of these posts, I was still recovering from surgery and feeling a bit fed up at not being able to use any of my time at home to make the kind of art I’d been busy with before.

Spending time working on my websites was rewarding, but for some reason I still felt guilty about not being able to work in the studio. I thought that it might be a good idea to think about all of my creative effort as a whole and celebrate that, so that it might help me to keep positive when I wasn’t able to move around. And yes, that it would prod me into making and doing more.

It was pretty easy to come up with the idea of using my Body Kun model as a stand-in for myself, or perhaps an ambassador. That didn’t mean I thought it was a good idea though, or that I didn’t worry about it getting lost in translation or lumped in with the myriad of other images made with the same figure… the immediate downside of using a mass-produced object for something like this.

Still, I had to go ahead with something, and if it was a mistake, then at least I’d have tried.

Did it work? I don’t really know, but it’s been fun, and that’s what matters. I’m 40 years old now, and I can admit that fun matters.

Creating another avatar – this time more of a mini-me – wasn’t something I’d thought much about, but it was immense fun and really opened my eyes to some new kinds of artwork.

I’m overly obsessed with “work” and productivity, and I still care too much about what people think. That’s probably true of a lot of artists, especially the ones who blog regularly; it’s definitely something that will resonate with those of us who spend a lot of our lives online. When there’s always something going on, you feel as though you should have something going on.

So, I think it’s time to focus on fast processes and short-term outcomes, because my love of materials means that would make me much, much happier than staying on the production treadmill.

Oh, and look at the book I made:

It’s coptic stitch bound with 7 signatures made from scrap paper, and the front and back covers were made from a piece I’d thrown together in 2015 and never used.

It looks as though I’ve found the perfect way to use up all the “one day this will be useful” things I’ve been hoarding for so many years, as well as overcome my fear of writing in a new notebook.

So even though I didn’t have a clue where I’d end up with this bit of the blog when I started, I’m chuffed that I tried it anyway. I’ll be here, shouting down the well for a while longer.