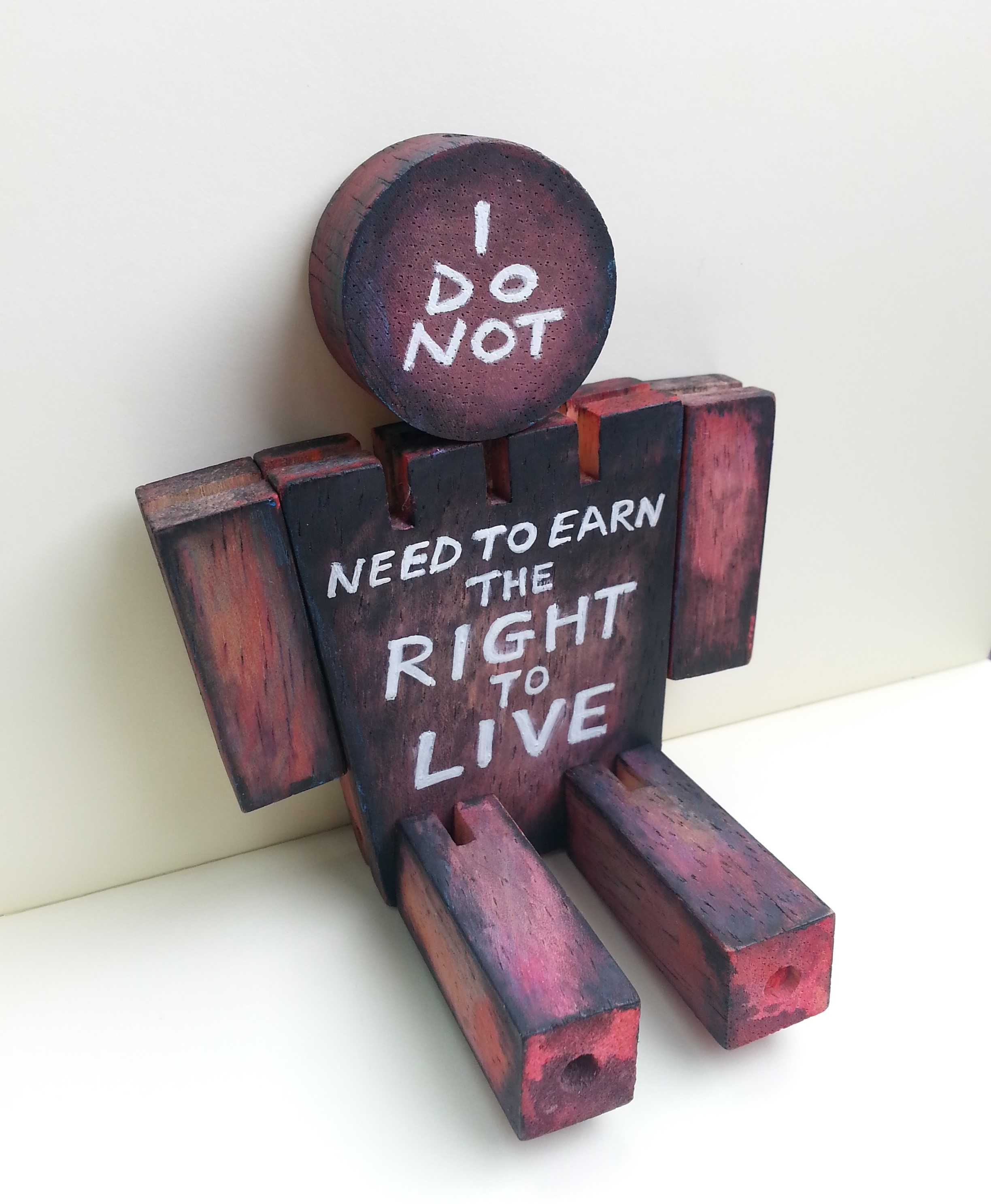 A colleague of mine gave me a little man and asked me to do something with him… something reflecting my personality.

Well, that automatically threw me into a tailspin – I couldn’t imagine what I was going to do, since I couldn’t even figure out what I was supposed to be “about”!

I was pleased that she asked me, but I sat down in a bit of a funk and wondered what I was going to do. I had ideas on the back burner for Foreign Exchange, which I’d been telling my friend about, but with so many ongoing projects in the other pockets of my life, I’d not gotten around to them… and they couldn’t be attached to this anyway. This was supposed to reflect me somehow, and that was the problem. I carried this little guy around in my handbag for months.

Meanwhile, I was reading about money, income and inequality. One day it suddenly occurred to me that I knew what I was thinking about, and that I had to start working on the commission. For some time I’d been reading articles on the idea of basic income, or universal basic income (UBI): the concept that a country’s citizens could be paid a flat rate of income by the government, not linked to work or means testing.

It appealed to me as a tool for feminism because it has the potential to transform the lives of women who perform unpaid and therefore undervalued labour in the home. Breaking the link between income and value would transform the way we think about work and about each other.

Income and value/money and morality

Money and morality have a sticky relationship, thanks in part to lingering Victorian ideology. We can hold two opposing thoughts in our heads:

a. that those who are poorer than us have made themselves that way by being immoral wastrels and vagabonds who would rather buy fags and booze with their benefits than get jobs.

b. that those who are richer than us have made themselves that way by the amoral pursuit of Mammon and would sell their own grandmothers for a profit (or by inheriting their parents’ riches, thus being both undeserving and corrupted).

We’re not comfortable with the very rich or the very poor, but we don’t seem (as a whole) to like the idea of UBI because it means giving money to people who don’t deserve it. Even if we all got the same amount, something about not earning… it feels immoral.

Still, having to rely on a paycheque to prove your worth in the world is cracked, in my view. No human being should have to prove their worth or their right to live based on how much they earn. What is a mother’s labour worth?

Your mother earned nothing by giving birth to you, but that act could never be remunerated. I still have a lot of reading to do around the subject before I write anything at length, but as a starting point… here I am.

To start with, I’ve found Inventing The Future: Postcapitalism And A World Without Work by Nick Srnicek and Alex Williams. Any recommendations?