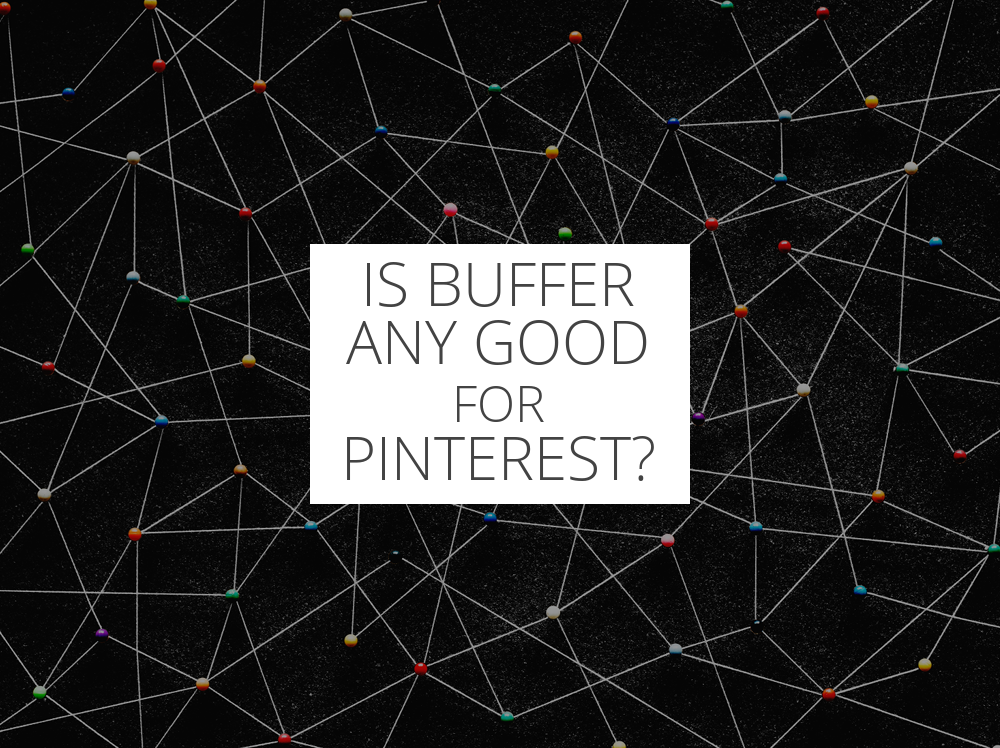 Is Buffer any good for Pinterest? Buffer is a powerful social media scheduling tool, but does it work as a Tailwind alternative for Pinterest management?

Pinterest is one of the essential marketing platforms that I’d recommend to visual artists. I’ve been using a manual pinning method for some time now, but I needed to upgrade to a scheduler to be able to manage my multiple accounts.

So I tried Buffer. Was it any good for Pinterest?

I went back to Tailwind*, and you should too. Anyway, here’s what I thought about Buffer:

Yes, Buffer allows you to reach lots of different social networks, but my focus is on Pinterest as a visual artist. Here’s why it didn’t work for me:

You can only pin one pin at a time!

Say what? This was a heartbreaker. The only thing that brought this around was that the same pin could be simultaneously pinned to different Pinterest accounts, as well as different social networks.

In short, because I have three Pinterest accounts to manage, it made it more worthwhile as I could create three pins at once, but only if I had a pin that could fit on all of those accounts’ boards. To make that pin go further I would have to re-buffer it after it had gone out.

Re-buffering speeds things up, but is limited.

So you can just hit “re-buffer” once a post has been published, and it’ll queue it up again. Did this help with my Pinterest strategy? Well, not really, since you can only re-buffer a pin to a single Pinterest account. I could save time by repinning it manually!

Repinning is a major pain.

After I installed Buffer’s Chrome toolbar, I expected to see a share button hovering over pins. I didn’t. I had to click on the pin to bring up the full size image in the pin’s url.

Repinning other people’s pins from group boards in this way pulled up, not the writer’s website, but the Pinterest website. So effectively clicking on the pin I made would no longer take you to the author’s website, but it would lead to the pin page instead. Almost useless, if I’m being harsh, but certainly less than ideal.

Whilst I accepted that it was good for helping me to push articles to Facebook, Twitter and the dreaded LinkedIn, sometimes the links were dropped and the posts were only images – not useful and plain embarrassing, although I caught it at only the second one and fixed all the others immediately. So that didn’t save me time.

I got so out of sync with my schedule that I started to feel stressed about it, which I really wasn’t before. I had so few posts lined up – and remember, I could line up 100 per account, but without a bulk spreadsheet upload it would still take a long time – that I turned to Hootsuite to fill in the gaps and get me up to speed with their extremely fast scheduler.

So whilst paying for a month of Buffer, I ended up using Hootsuite’s free plan to make me feel better.

When I cancelled my plan, Buffer requested some feedback. Normally I don’t bother, but here’s what I wrote:

I want to focus on Pinterest for marketing my businesses as it’s the biggest driver of traffic for me. I love that I can use Buffer to schedule pins as so few providers offer this, but in reality the process is slow and tedious. You can’t repin from Pinterest easily, as the url picked up is the Pinterest url, so that means that if anyone clicks through a pin I’ve saved from the Pinterest website, it doesn’t go back to the original content – just another pin. That’s useless for reciprocal pinning as it adds another wall for website visitors to get through.

It’s good that I can pin content across several Pinterest accounts, but that’s of limited use as I don’t often have content that fits all three of my accounts. I can’t pin to multiple boards on one single account at once, and that’s a deal breaker.

It’s been interesting trying out scheduling to the other platforms, but trying to keep up with Pinterest via Buffer has been a nightmare and I regretted it almost straight away when I discovered the limitations. I had a manual pinning routine that could have yielded the same results in a similar amount of time, and I was willing to pay to save my time, which it hasn’t done. The other platforms haven’t made up for it, so it simply isn’t worth the money for me.

Is Buffer any good for Pinterest? I don’t think it is.

Yes, you can use it for Pinterest, but at a basic level. At first, I went back to combining my trusty spreadsheet with a Hootsuite trial, but after resuming the hunt for a better, affordable scheduler, I went back to Tailwind.

The point of social media scheduling is to make your life easier, and my goal is to free up more of my time back to invest into making art, and share the things that work for me so that you can invest more of your time into your own work too.

Get a free trial of Tailwind – still the best I’ve found – and see if it’s worth it for you.*