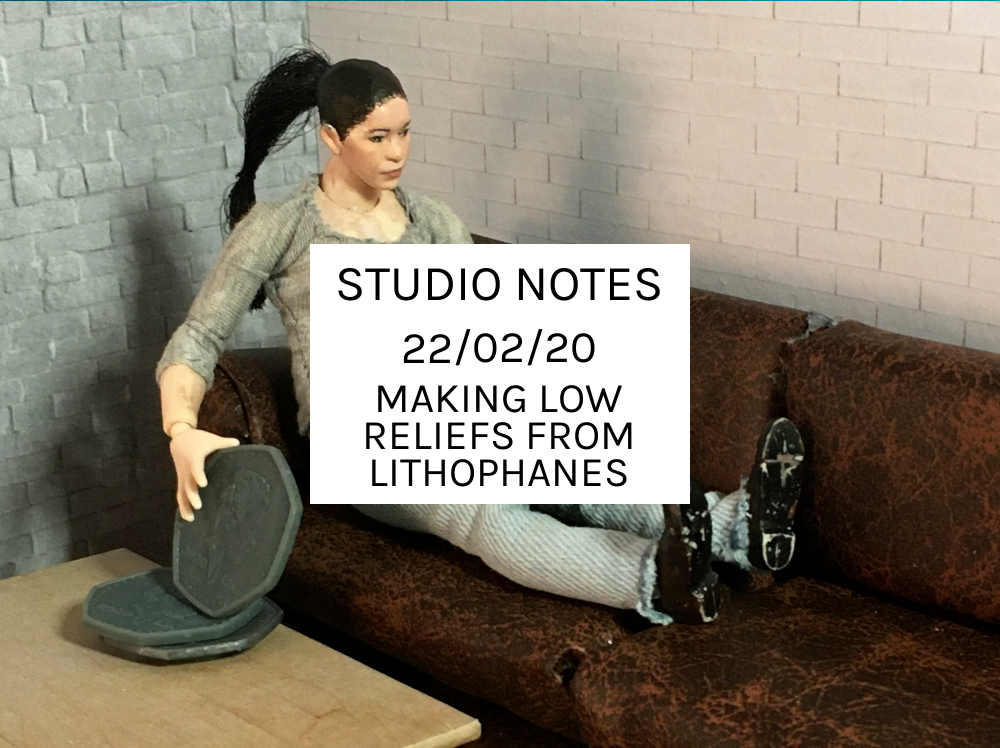 Studio Notes 22/02/20 - Making Low Reliefs From Lithophanes. You can use a lithophane generator to make low-relief sculpture stl files, after a few tweaks.

First of all – what’s a lithophane, and how do you make one?

Lithophanes are images made from solid blocks of translucent material that are carved (or nowadays, printed) to allow more light to pass through as the material becomes thinner.

You can easily turn a photograph into a .stl file ready to print as a lithophane by using the tool at 3DP.rocks.

The best kind of images for making lithophanes

It helps to prep your images and remove backgrounds that would be distracting, and I’ve had most success with converting images into black and white, with higher contrast.

Why you need to combine two images to convert into low relief sculpture:

The lithophane maker works brilliantly, but a low-relief sculpture isn’t made in the same way as a lithophane is carved. Light transmission isn’t a consideration, so the two techniques are different.

I’ve found that the positive and negative images return different topological forms, with ears, eyebrows and noses going in different directions, out of or into the block. Combining the files from two images (or better yet, editing the original image to invert specific features) will make one file with all of the “carving” facing the right way.

I got really carried away working on rendering the coin in different metals, but I don’t have a machine powerful enough to pull off the 360° animation I attempted. Yep, it’s a pointless rabbit hole, but it was tempting to see what the finished item might actually look like.

Anyway, figuring out this method of making low reliefs from lithophanes will save a fair amount of time in the future, and I’m already working on the rest of the family.

My weekly portrait is a riff on the previous stencil, using the negative space and cutting the positive out of cardboard. Not in a hurry to do this again.