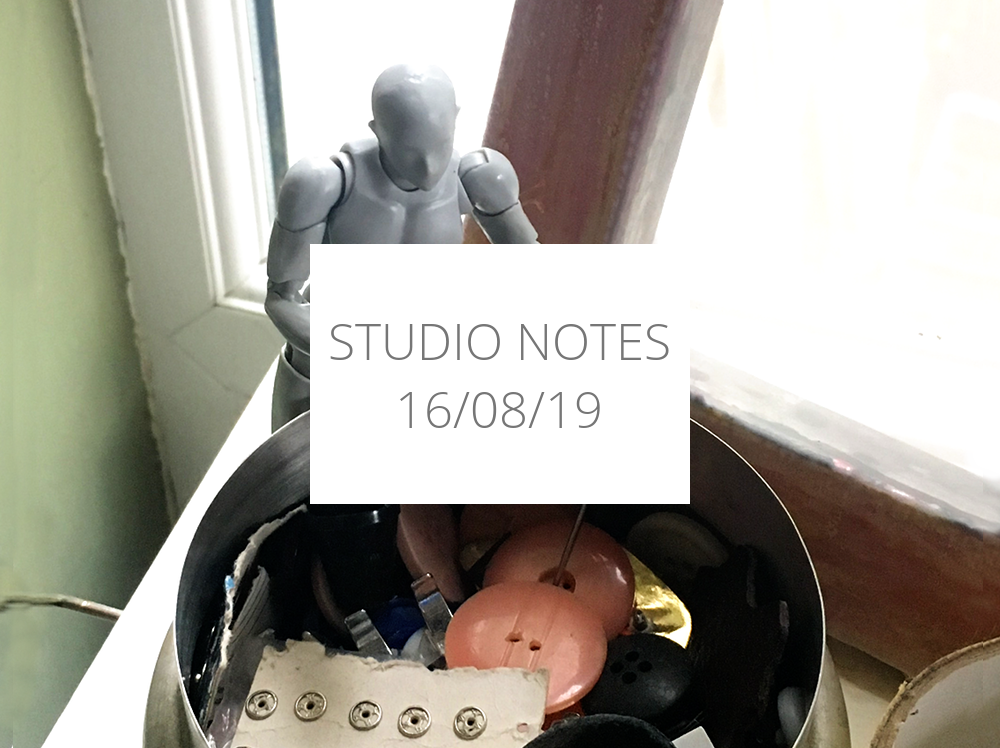 Studio Notes 16/08/19 - trying to fit in time in the studio during a very busy week, I've experimented with retacking a cutting mat with PVA glue.

After a long weekend travelling back and forth to Liverpool – and not going to the Tate – I had a shedload of catching up to do.

Unfortunately most of the catching up had to do with housework, DIY, writing new articles, updating old articles and creating new graphics for them.

Before all that I did manage to find some buttons in my vintage stash to update a 1930s top that I’ve been meaning to fix for something like ten years. I do get around to things eventually.

Feeling a little frustrated with myself for having another week go by without much happening in the way of artwork, I tried out a bit of an experiment to see if I could get the next week off on a speedy start.

When you get a home cutter-plotter machine, you’ll need a cutting mat, which is essentially a square bit of laminated card, onto which your material to be cut will be stuck.

You’ll need to stick it onto this cutting mat (or carrier mat) to be able to cut shapes out without the entire thing falling apart, so really it’s an essential.

The problem comes when the stickiness wears off and you haven’t got anything to use to renew the adhesive! Basically that’s where I am right now, so before I order this sticky mat adhesive* I tried using watered-down PVA applied with a foam brush to see if I could recreate the low-tack effect without spending any money.

It worked, after beefing up the ratio of glue to water, but the problem was, it was a little too tacky, and some of the kraft paper stuck.

Still, as I understand it, that’s just what happens with these cutting mats – working out the right level of adhesion is part of the process. I’m still going to get the proper glue though.

I’ve got a very different design in mind for a smaller coin; I had thought of it as being much smaller, but having just cut several basic shapes out of kraft paper for my experiment, I might just keep it at the size I produced. Maybe next week I’ll be able to show some more of that.

Oh, and the copper leaf on my shoes survived! Although it’s flaking off terribly now… at least it did the job for the day.