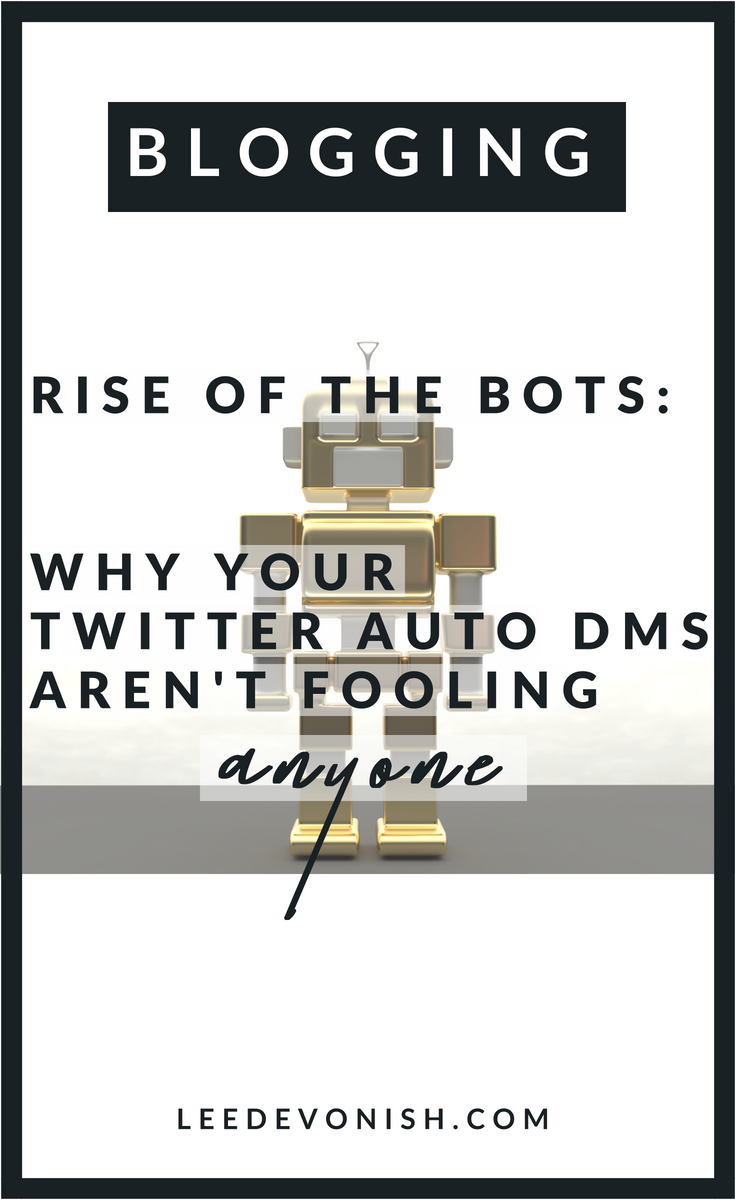 Rise of the bots: why your auto dms on Twitter aren’t fooling anyone

If you’ve spent any time on Twitter, you’ll probably have come across the automated Direct Message, or auto DM.

They’re supposed to be a tool to drive engagement and make new followers feel welcomed. Well, I’ll cut this post significantly shorter than it could be by getting to the point: they’re annoying and no-one likes them.

Some of the most annoying are the ones that essentially go: “hey, thanks for following me on Twitter! Now go follow me here, there and everywhere else, and now go read my blog or buy this thing”. Cheeky or what?

But you’ve been told you should be doing it? Wha? Who should you believe?

Yep, I myself have set up auto DMs on Twitter in the past. Why? I read some advice somewhere online that made me think it was a good idea.

Where did I get that advice from? Probably a company that provides auto DM services. Makes sense, right?

Why did I stop? I got very, very little engagement back from those messages, and I would guess it’s because I just came across like every other bod who uses bots.

I’ve even read that they’re not all bad, as they provide an opportunity to start a conversation with someone who might not yet be following you back. But wait – that person’s sent an automated message because they don’t want to start a conversation themselves. They’re probably too busy, or most likely, they don’t check their DMs because they’re also swamped with auto DMs as well.

There must be some diabolical mind behind that automated message service that, right at the end, purposefully misspells “week” as “qeek”. Then, instantly, it sends a follow up message that says “week*, not qeek, oops“.

This might get you, but not after you’ve followed the second person who makes the identical “mistake” at the end of their message. After the third person makes that identical mistake… well, it’s suddenly more sad than funny.

What to do instead of auto DMs

Lots of people will tell you to simply be a human and engage with people on Twitter to build your following.

The fact is that most of us are busy, and becoming increasingly more busy hammering away at every social media strategy we can to give our blogs and businesses a fighting chance in this competitive online space. We’re stressed. We can’t do it all. So we look for easy options.

What do I suggest?

How about taking a bit of time to check your feed and retweet something that catches your eye? Or comment? Or even just like someone else’s tweet?

Oh, and don’t bother starting a DM by apologising for sending it even though you know they’re annoying. If you already know it… just… stop.

The fact is, you can’t be online all of the time, and I’ve even taken an extended break from promoting my work on Twitter because I just wanted the headspace back.

I recommend RecurPost for automating some aspects of social media (including Twitter, as we’ve been discussing). It’s easy to use and has a free starter plan, and leaves no icky feeling whatsoever!

Why Do So Many Blogs Look The Same?

How Bloggers Fake Popularity (And How You Can Do It Too)

How To Name Your Blog Without Sounding Like A Fool

Why You Probably Shouldn’t Start A Blog

The Psychology Of Blog Post Titles: How Being Mean Gets You Readers